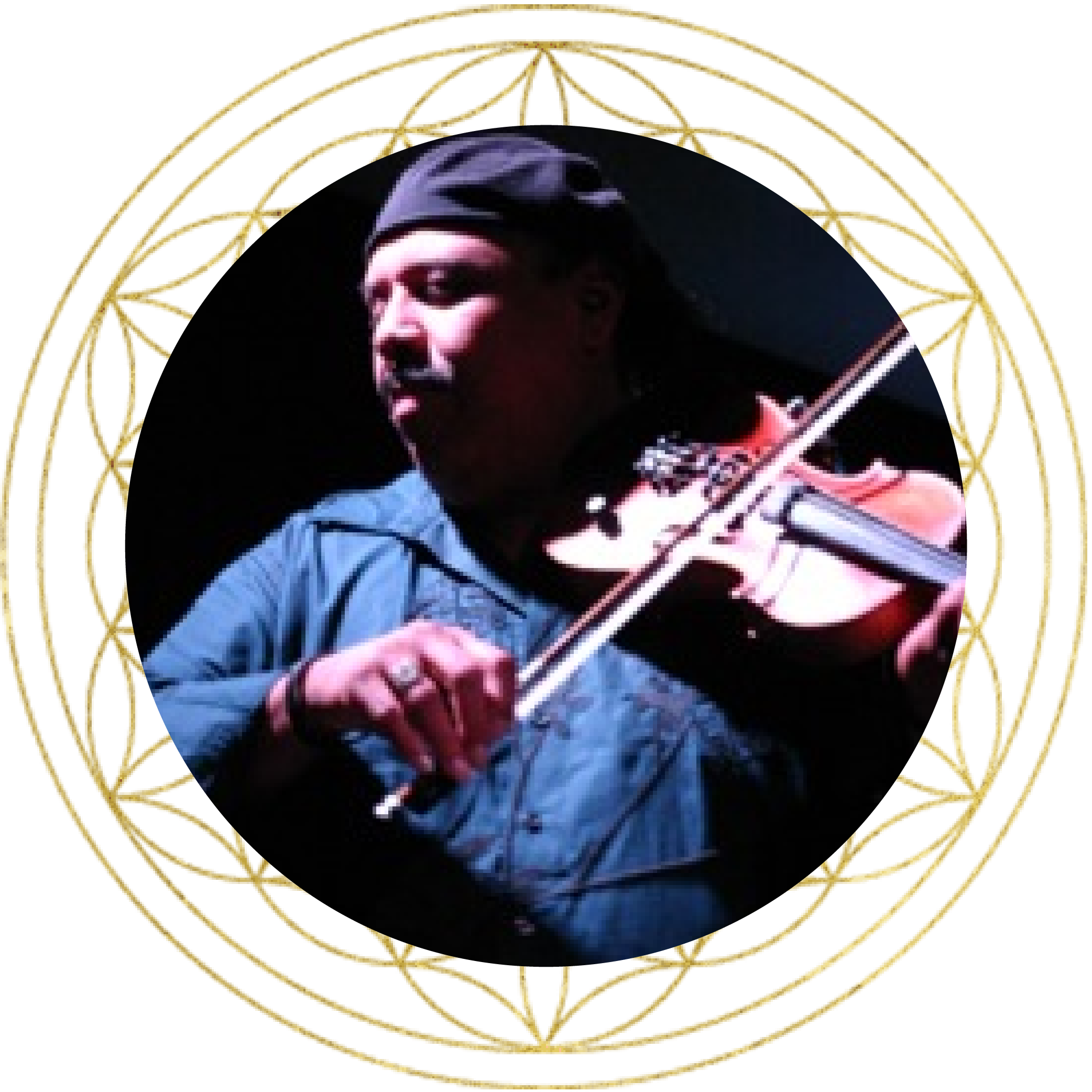 On stage from the age of five, Carlos Reyes never ceases to amaze. World renowned for his mastery of the Paraguayan harp and violin, Carlos’ musical talents have touched the hearts and spirits of people around the world. From performances on the stages in Havana Cuba to the Vatican, his music transcends all boundaries. Carlos bridges traditional musical genres and mesmerizes audiences with unique fusions of Blues, Rock, Jazz, Latin and Classical styles.

Born in Paraguay to a world-famous musician and national hero, Carlos began to play the violin at age three and a half under his father’s strict tutelage. He moved with his family to the United States as a child and continued to develop his already extraordinary musical talent. At age ten, he debuted on harp with the Oakland Symphony and made his debut on violin with the Oakland Youth Symphony at age fourteen.

He continued to develop his talent on both harp and violin, establishing himself as a successful solo artist, touring the world and also sharing the stage with a long list of musical superstars such as Steve Miller, Zac Brown, The Doobie Brothers, Clint Black, Charlie Daniels, Willie Nelson and many others. Bay Area audiences have been fortunate to see Carlos in concert with legendary slide guitarist Roy Rogers. Carlos has performed for 6 presidents and recently invited to perform at The White House along side Gloria Estefan, trumpet master Arturo Sandoval, Mexican artists -Lila Downs and Marco Antonio Solis.

In addition to his profound mastery of harp and violin, Carlos also plays guitar, bass, mandolin, and keyboards; and is a well-respected producer, composer, and engineer and has been at the forefront of introducing the Electric Harp to the world. He has consistently broken technical and musical boundaries and pioneered techniques that have expanded musical possibilities for musicians and audiences alike. Standing ovations are the norm, not the exception — when Carlos and his aptly named band “The Electrick Symphony” performs.

The magnitude of Carlos’ musical talent is matched only by his spirit and generosity. His passion for helping others is evident through his frequent appearances at benefits such as Hope for Haiti, the Voices of Latin Rock, the Animal Rescue Foundation, work with local school systems and numerous community events.

Carlos is also a known speaker and lecturer giving talks, workshops and master classes in the field of music, Harp, violin and stage performance, and the psychology of the artist’s performance on stage. …This at a college level. His vast experience and training has given him so much knowledge to share to his academic audience from a learned and real world personal experience, He has recently shared the stage and lectured with renowned author and speaker Dr. Daniel Levitin. Some of his classroom stages have been Miami University, Diablo Valley Collage, Special invitation to Cuba to speak, teach and record with the world famous La Camerata Romeu producing a CD of Latin American/Jazz music for The Camerata and Carlos on Harp and Violin. 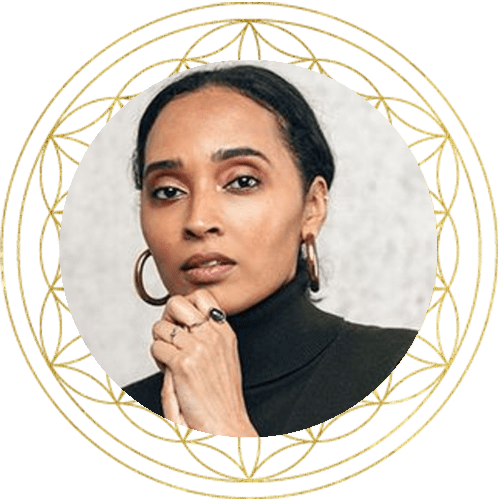 Lalah Delia is an author, spiritual writer, wellness educator, and the founder Vibrate Higher Daily. Her writings and new bestselling book Vibrate Higher Daily: Live Your Power is guiding readers around the globe on a journey back home to their empowered, higher-potential, and whole selves. Through her lyrical and organic writing and teaching style and experiences, Lalah enlivens spiritual seekers looking to live with more intuition, empowerment, purpose, confidence, high vibrations, and grace.

Her work is a response to her journey and to the current vibrational-state of the world we live in, share, navigate and journey in and through daily.

Lalah can be found featured in an array of press including, New York Magazine’s The Cut, Glamour Magazine, Harper’s Bazaar, Thoughtfully Magazine, The Fullest, as well as by ESSENCE, Girlboss, Goop, Black Girl In OM, MindBodyGreen, The CUT, i-D Magazine, The ChalkBoard Mag, LA YOGA, Refinery29, Hollywood Reporter, and more.

Lalah was selected by Target as a wellness expert and mentor for their Advice series ‘Wednesday Wisdom’, via @TargetTag. Alongside that, Lalah is an ambassador for Reebok’s #BeMoreHuman campaign. 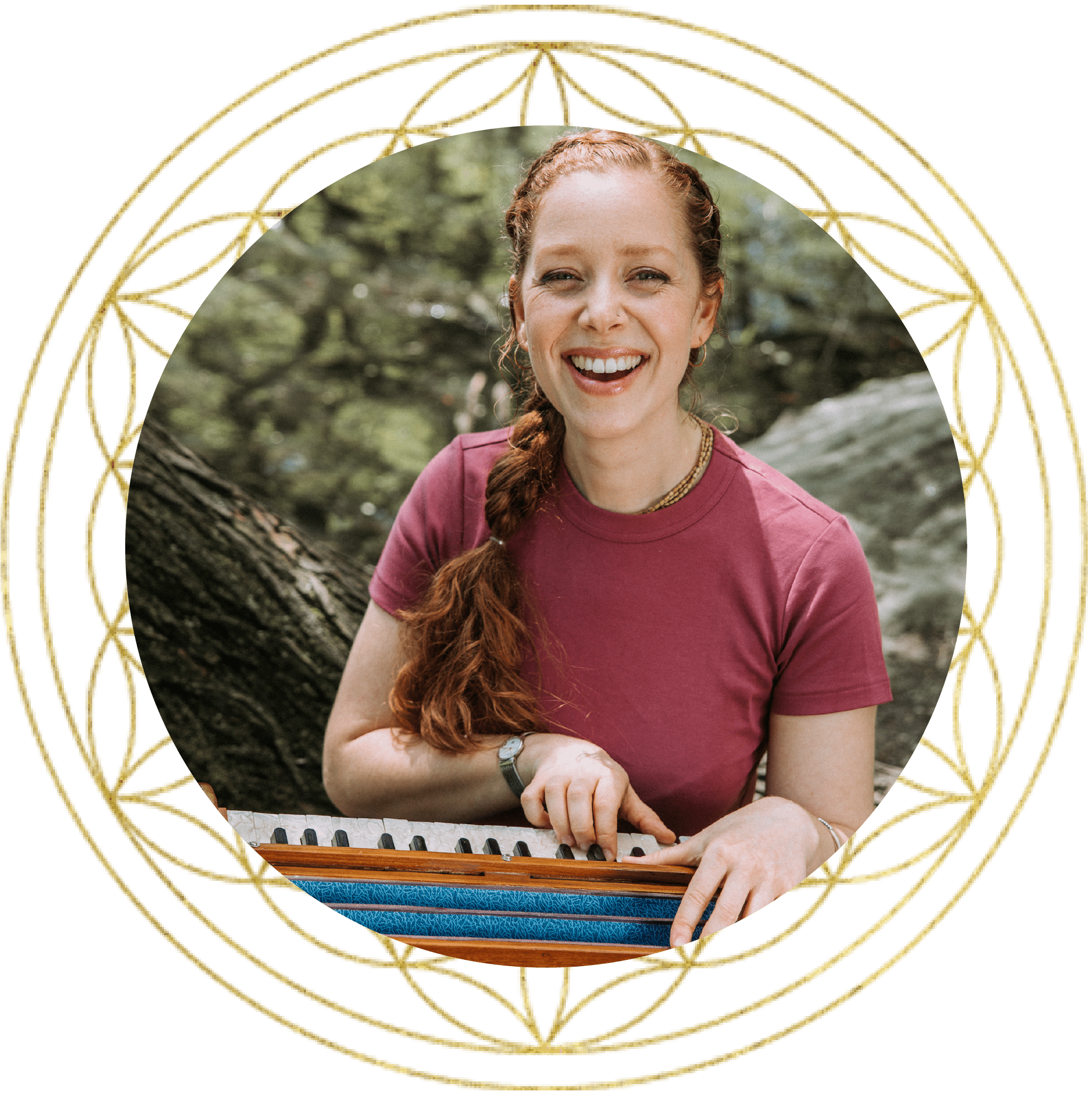 Jahnavi Harrison was raised in a family of Bhakti-yoga practitioners at Bhaktivedanta Manor, one of England’s most important spiritual landmarks. As a child she was fascinated with song and story, and has nurtured that interest through her life long exploration of music, dance, visual art and the written word. She is a musician who aims to channel her creative expression as a path to self-realisation and service.
For over 12 years she has travelled the world, offering her voice and violin playing in the performance of sacred music and call-and-response mantra chant (kirtan). Her sound encompasses rich influences of East and West, and aims to offer an experience which truly nourishes the spirit.
She released her debut album, ‘Like a River to the Sea’ in July 2015, and features on the Grammy nominated ‘Bhakti Without Borders’ charity album (2016). Jahnavi presents regularly for BBC Radio 2’s ‘Pause for Thought’ and ‘Something Understood’ on BBC Radio 4. In 2020 she collaborated with Willow Smith on the single ‘Surrender (Krishna Keshava)’ and the EP ‘RISE’. 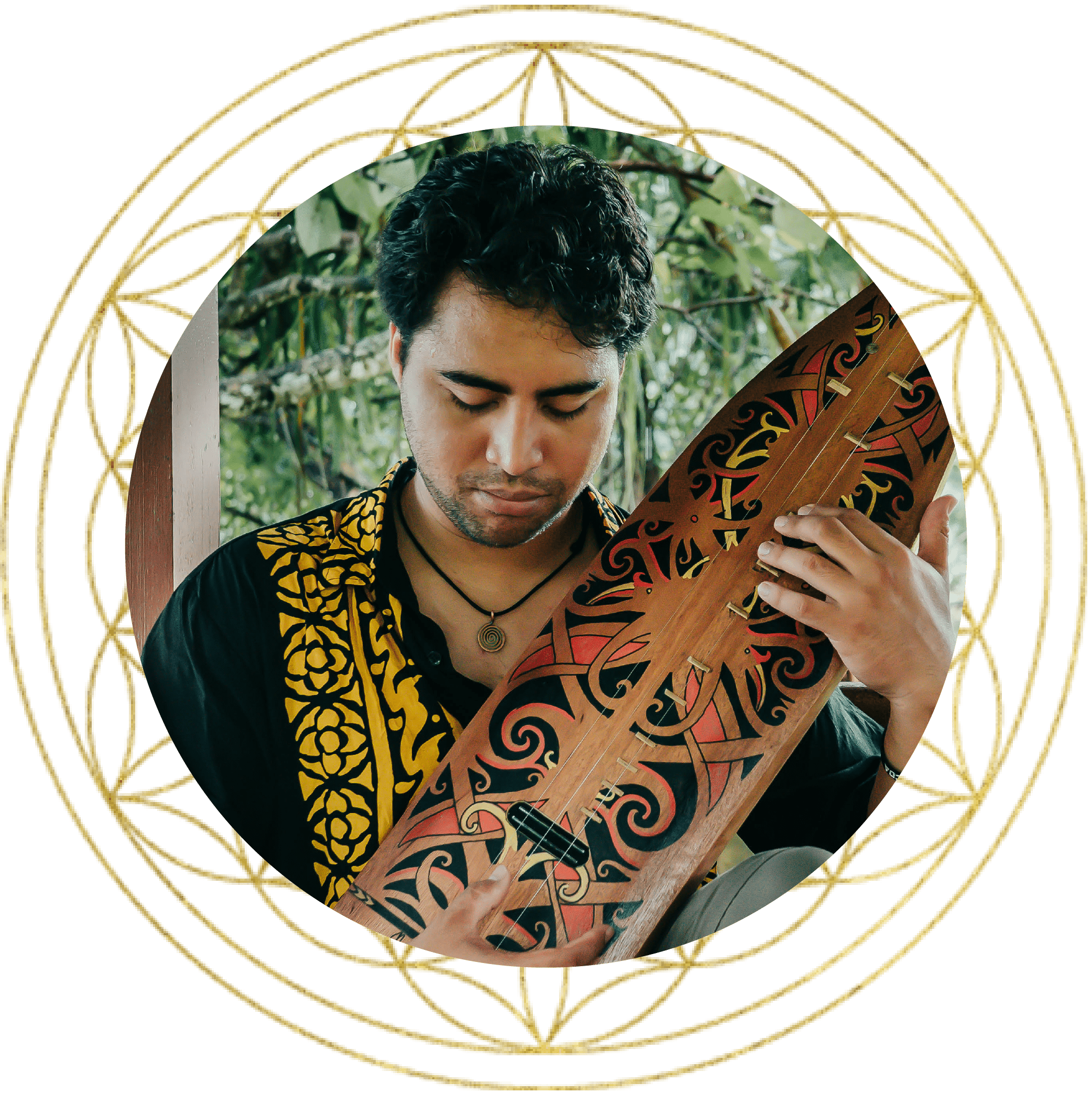 Noor Che’ree’s journey through music includes many stops around the world with a variety of artists and organizations. A former US Marine Musician for the 1st Marine Division Band, UN Global Advisor, an Award Winning Multi-Instrumentalist, and an International Touring Artist, Che’ree strives to explore new territories in his eclectic taste of world sounds and cultures, while marrying his musical influences to the creative process of all music. Che’ree has worked with numerous artists such as Grammy Nominated Tracy Carter, Grammy Winner Bakithi Kumalo, Grammy Winner LV, Ghetto Romeo, SZA, Nobel Prize Winner Dario Fo for the ATICC theater show, They Don’t Pay, We Won’t Play, and many more.For over 12 years she has travelled the world, offering her voice and violin playing in the performance of sacred music and call-and-response mantra chant (kirtan). Her sound encompasses rich influences of East and West, and aims to offer an experience which truly nourishes the spirit.
She released her debut album, ‘Like a River to the Sea’ in July 2015, and features on the Grammy nominated ‘Bhakti Without Borders’ charity album (2016). Jahnavi presents regularly for BBC Radio 2’s ‘Pause for Thought’ and ‘Something Understood’ on BBC Radio 4. In 2020 she collaborated with Willow Smith on the single ‘Surrender (Krishna Keshava)’ and the EP ‘RISE’. 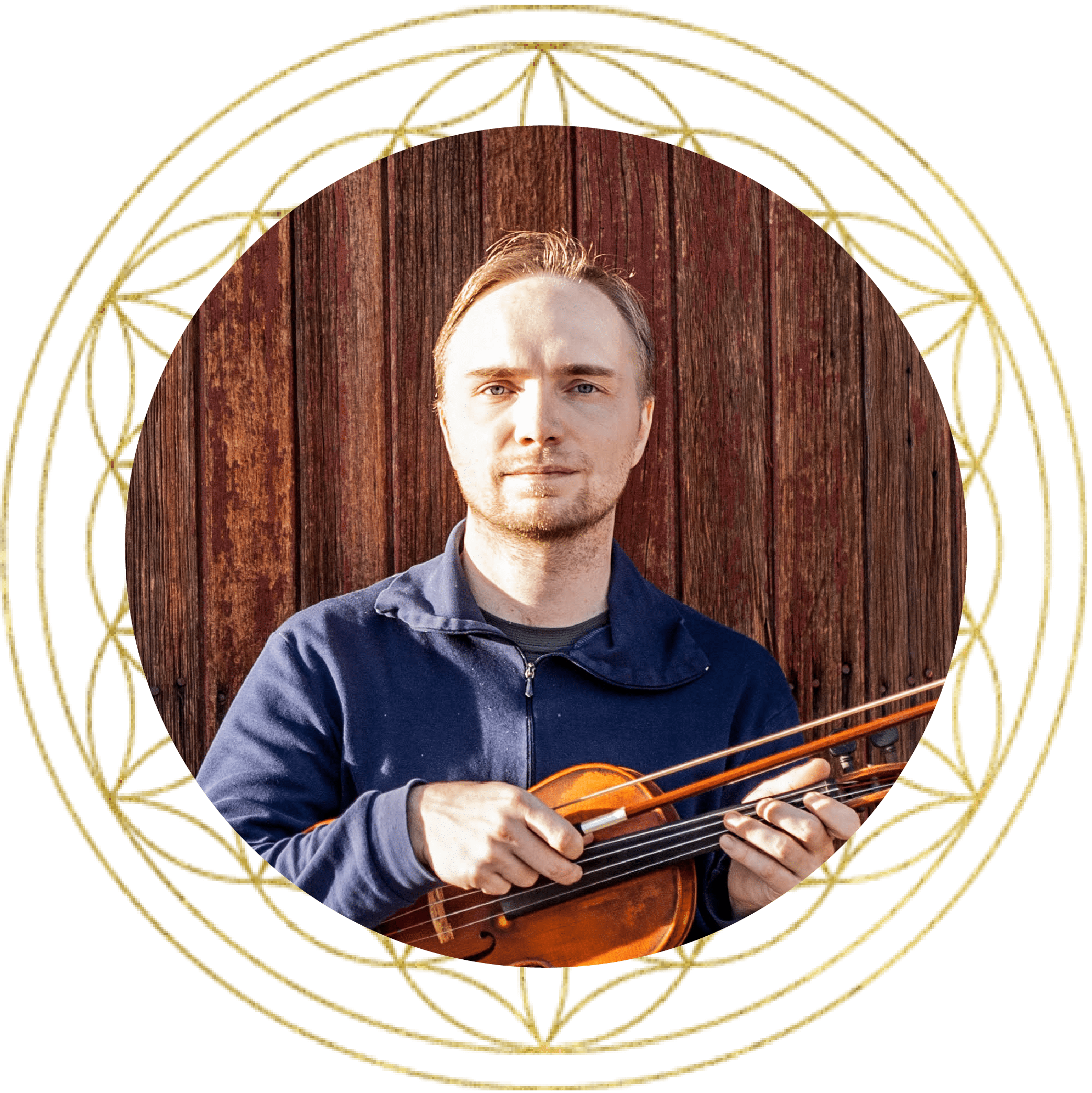 Jonas Petersen loves to wear the hats of many. 15 years after being told by his Violin teacher to put his instrument aside to pursue a career as a sound engineer and music producer, he is still going at it. Playing violin, recording and producing music, every day. It was, after all, a good choice, to not listen to anyone’s advice. His career in the music industry has led him to collaborate with outstanding artists, producers, labels, and companies such as Hans Zimmer, Disney, ABC, Sony, Warner Bros, DreamWorks and many more. His focus on film- and music for media has awarded him the advertising industry’s highest honor in 2017, the Clio Entertainment Award. Every day he brings orchestral music to life, be it with live orchestras at Los Angeles’ legendary studio facilities or at his own studio, with his own violin.She released her debut album, ‘Like a River to the Sea’ in July 2015, and features on the Grammy nominated ‘Bhakti Without Borders’ charity album (2016). Jahnavi presents regularly for BBC Radio 2’s ‘Pause for Thought’ and ‘Something Understood’ on BBC Radio 4. In 2020 she collaborated with Willow Smith on the single ‘Surrender (Krishna Keshava)’ and the EP ‘RISE’.